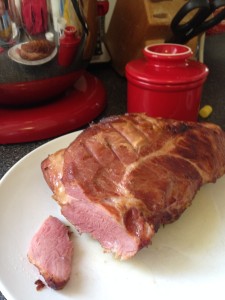 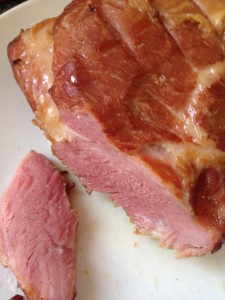 Last November I attended a class on Pig Butchery where we learned how to seam butcher an entire side using just a knife. I came home with an entire back leg (the ham) but knew that I would not be able to cure and smoke such a large piece of meat. Chef Paul Buchanan told me I could follow the natural muscle lines and separate the ham into smaller sections. I did that the next day and froze the meat. 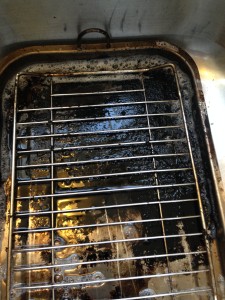 Last week, I decided it was time to do some curing. I defrosted one ham, made a brine, and cured the ham in the refrigerator for three days. After the curing time, the ham was removed from the brine and put on a rack in the refrigerator and allowed to form a pellicle. The pellicle is the dried outside of a piece of meat that allows the smoke to adhere.
This morning I put the ham in my stovetop smoker for a little over an hour. It needed to get to an internal temperature of at least 140°. It came out beautifully and tastes great – now if only the pan looked good!

This entry was posted in cooking. Bookmark the permalink.