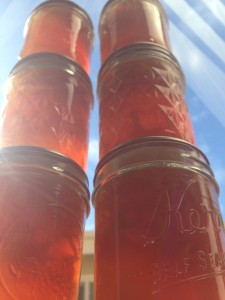 The lime tree in the backyard was filled with fruit this year. I picked enough to take with me to a Master Food Preserver Continuing Education class and had plenty leftover to make a Ginger Lime Marmalade.

I am experimenting with a formula for making a marmalade. The basic formula is 2 pounds of fruit, 2 pounds of water, and 2 pounds of sugar. Some adjustments in the sugar should be made depending on the sweetness of the fruit. For example, grapefruit might need a bit more sugar and kumquats a little less sugar.

I prefer my marmalade a little sweeter, not bitter, so I peeled the fruit using a vegetable peeler which leaves most of the pith behind. The limes are juiced and the peels are stacked and cut into slivers. The rest of what is left of the fruit is placed in a pot and covered with water, brought to a boil, the heat turned off, the pot covered, and left to sit for at least 12 hours.

The next day the water that covered the pith and membranes was almost syrup-like. The pectin from the membranes and pith had thickened it. I strained the liquid that was now syrupy into a measuring cup and added the reserved juice and the peels. I matched the liquid in the measuring cup 1:1 with sugar. (If I had four cups of liquid, I measured out 4 cups of sugar.) I put the liquid and sugar in to my preserving pot, added about a tablespoon per cup of fresh grated ginger, and brought the mixture to a boil. I cooked it until it reached 220° and then filled my clean, hot half-pint jars. I processed the marmalade in a waterbath canner for 10 minutes.

This entry was posted in canning/food preservation, gardening. Bookmark the permalink.